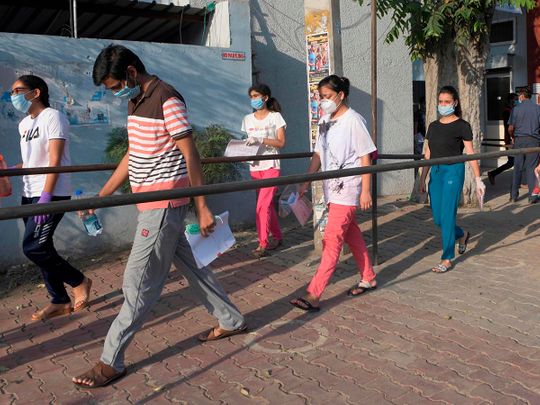 Mumbai: India’s economic recovery prospects have gone from bad to worse after the nation emerged as a new global hotspot for the coronavirus pandemic with more than 5 million infections.

Economists and global institutions like the Asian Development Bank have cut India’s growth projections from already historic lows as the virus continues to spread. Goldman Sachs Group now estimates a 14.8 per cent contraction in gross domestic product for the year through March 2021, while the ADB is forecasting 9 per cent decline. The Organisation for Economic Co-operation and Development sees the economy shrinking by 10.2 per cent.

The failure to get infections under control will set back business activity and consumption – the bedrock of the economy – which had been slowly picking up after India began easing one of the world’s strictest and biggest lockdowns that started late March.

“While a second wave of infections is being witnessed globally, India still has not been able to flatten the first wave of infection curve,” said Sunil Kumar Sinha, principal economist at India Ratings and Research Ltd., a unit of Fitch Ratings Ltd. He now sees India’s economy contracting 11.8 per cent in the fiscal year, far worse than his earlier projection of 5.8 per cent.

Goldman Sachs’s latest growth forecast came last week after data showed gross domestic product plunged 23.9 per cent in the April-June quarter from a year ago, the biggest decline since records began in 1996 and the worst performance of major economies tracked by Bloomberg.

While there are some signs that activity picked up following the strict lockdown, a strong recovery looks uncertain. “By all indications, the recovery is likely to be gradual as efforts toward reopening of the economy are confronted with rising infections,” Reserve Bank of India Governor Shaktikanta Das told a group of industrialists Wednesday.

The central bank will likely release its own growth forecast on October 1 when the monetary policy committee announces its interest rate decision. In August, the RBI said private spending on discretionary items had taken a knock, especially on transport services, hospitality, recreation and cultural activities.

The plunge in GDP, as well as ongoing stress in the banking sector and among households, will curb India’s medium-term growth potential. Tanvee Gupta Jain, an economist at UBS Group AG in Mumbai, estimates potential growth will slow to 6 per cent from 7.1 per cent year-on-year estimated in 2017.

India is “likely to see a shallow and delayed recovery in corporate sector profitability over the next several quarters,” said Kaushik Das, chief economist at Deutsche Bank AG in Mumbai, who has downgraded his fiscal year growth forecast to -8 per cent from -6.2 per cent. That will “reduce the incentive and ability for fresh investments, which in turn will be a drag on credit growth and overall real GDP growth.”

Still, foreign investor sentiment will likely return once the pandemic eases, said Todd Buchholz, a former White House economist and now author. “The virus is seen as a temporary phenomenon,” he said in an interview. “Those investors who were lining up to invest in India in January 2020 will do so in 2021 also, and deregulation has to continue.”