A couple of weeks from becoming Ford Motor Co.’s next chief executive officer, Jim Farley stopped to huddle with two young field sales representatives during an event to honor employees at a Dearborn, Michigan, dealership.

“What’s the one thing at Ford Motor Co. you’d like to change?” he asked them, eliciting responses about the need for more models on the lot and financial assistance to market them.

It’s a question Ford’s chief operating officer is asking everyone he encounters these days as he prepares to take control on Oct. 1 of the 117-year-old automaker, which is struggling to find its way in a new transportation reality of shared, electric and self-driving cars. He put the question to factory workers at Ford’s century-old Rouge manufacturing complex and middle managers at the automaker’s headquarters.

He’s even engaged the services of a “reverse mentor,” a staffer in Ford’s customer-experience area who is six levels below Farley on the org chart. “We need to invert the company,” Farley, 58, explained on the sidelines of the dealer event. “We need the decisions and the authority and autonomy to come from all of us to unleash Ford.”

Nicknamed Jimmy Car-Car by his parents for his love of all things with wheels, Farley was a rising star at Toyota Motor Corp.’s North American operations where he worked for almost two decades. But his roots at Ford run deep. He spent summers with his grandfather – among the first Ford workers to build the Model T. At age 14, he drove from California to Michigan to visit his grandfather in a black 1966 Ford Mustang he had rebuilt. He didn’t yet have a driver’s license.

When asked on the day he was named CEO last month what it would mean to his late grandfather, Farley broke down. “For me on a personal level, it’s quite – sorry, I’m just getting a little emotional,” Farley said, choking back tears. “It’s quite humbling to think about my grandfather going into Highland Park and how humble his life was before that “”- how much opportunity happened because of Ford. I just feel very in debt to the company.”

Ford’s profits have declined for the last three years, and it expects its first annual loss in a decade this year. Electric-car leader Tesla Inc. and Alphabet Inc. self-driving unit Waymo have stolen the march from established automakers. Farley’s appointment is an acknowledgment the company needs to change to survive the seismic shifts upending the industry.

Long before Covid-19 crashed auto sales, Ford was suffering an identity crisis: Is it simply an old-line manufacturer churning out almost a million (highly profitable) pickup trucks a year? Or can it become a purveyor of smart, connected transportation, selling both the metal and mind of an automobile that runs on batteries, not brawny combustion engines?

Those questions stymied the last two occupants of Ford’s corner office “”- company lifer Mark Fields, ousted by the board in 2017, and Jim Hackett, a former office-furniture executive whose $11 billion overhaul of the automaker has been slow to gain traction. Ford’s shares are down 60% since 2014.

“Ford stock has just been pummeled the past few years and then Covid made it worse,” said David Whiston, an analyst with Morningstar Inc., who rates Ford the equivalent of a hold. “The Street could use more clarity.” 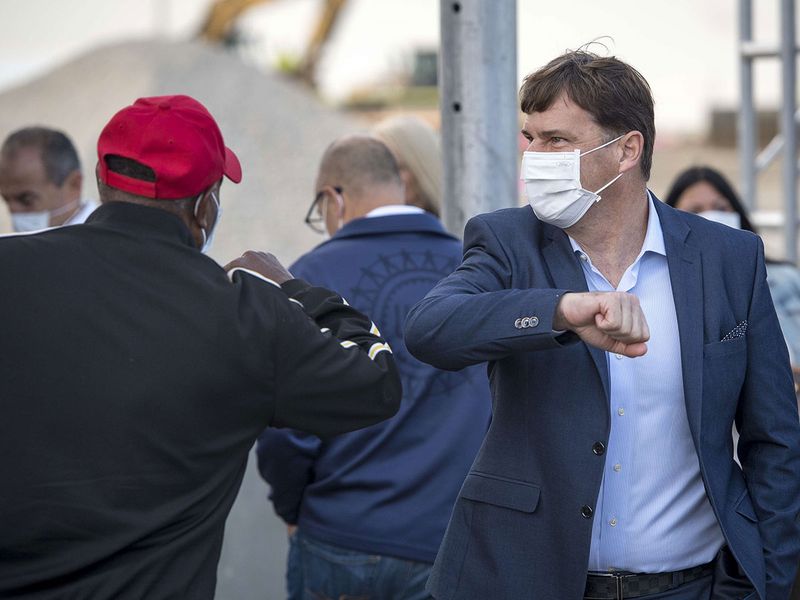 Farley, the company’s third CEO in six years, has been coy about his plans, instead seeking plenty of advice from co-workers.
Image Credit: AFP

Farley, the company’s third CEO in six years, has been coy about his plans, instead seeking plenty of advice from co-workers. Tapped to become Ford’s chief operating officer March 1, his internal listening tour belies a reputation as a blunt marketing specialist whose emotions occasionally boil over.

“He drives people hard because he drives himself hard,” said Bob Shanks, who retired last year as Ford’s chief financial officer. “But given what Ford is facing and the need for continued dramatic change, he’s in a really good place to lead the business because he can make the tough and hard decisions and really push people.”

Farley was recruited by charismatic CEO Alan Mulally and Executive Chairman Bill Ford in 2007 from Toyota, where he introduced the Scion brand of youthful cars and ran the Lexus luxury line. Not long after arriving at Ford, he famously shouted “I hate them,” about GM, in an impassioned meeting with subordinates, according to the 2011 book “Once Upon a Car” by then-New York Times Detroit Bureau Chief Bill Vlasic.

In his first meeting to introduce himself to Ford’s top 300 executives in 2008, he became overwhelmed sharing the story about how he and his wife, Lia, had recently lost twins who were born prematurely.

“What struck me was how vulnerable he allowed himself to be in front of a group of essentially strangers,” recalled Shanks. “He let his feelings show, which is great, because in our business a lot of people, particularly men, wouldn’t be that way.”

Ford is turning to Farley to unleash that passion into a company that has sinking sales worldwide. The automaker has been adrift since Mulally retired in 2014 after guiding it through the Great Recession without resorting to the bankruptcies and bailouts that befell its crosstown rivals, GM and Chrysler.

“Everyone at Ford knows the situation we’re in,” Farley said in February before the pandemic shut Ford’s factories for two months. “I can see it on the faces of my colleagues, and it takes me back to about 10 years ago” during Ford’s near-death experience.

Farley has promised to accelerate the turnaround. “Now it’s time to go,” he says. His listening tour comes from Toyota’s philosophy of genchi genbutsu, or “go and see.” The frenetic CEO-to-be works out his stress on the race track and at speeds over 200 miles per hour. He has driven his vintage Ford GT40 at Le Mans in France. His garage also includes a Cobra and a Lola 298.

Wayne Rainey, a three-time world champion motorcycle racer and long-time friend, says his buddy is all business once he puts the helmet on.

“He’s inch perfect with his racing lines; I’ve never seen him spin out and he’s very aggressive,” Rainey said. “I’ve seen him in the dirt going after guys to try to pass them.”

As he takes the wheel at Ford, his hand is strengthened by new models on the launching pad, including a redesigned F-150 pickup, Ford’s biggest money maker, an electric Mustang Mach-E and a revival of the rugged Bronco SUV, which has already received 165,000 deposits of $100. He has promised the manufacturing roll-out of those new models will be “flawless” after last year’s botched launch of the Explorer SUV that cost Ford more than $1 billion.

Farley has sought the counsel of blue-chip corporate chieftains who have navigated existential crises, including JPMorgan Chase CEO Jamie Dimon, IBM Corp. Executive Chairman Ginni Rometty and Dell Technologies Inc. founder Michael Dell.”I’ve tried to learn as much as I can from other leaders who have had their base be a physical product and then go out and have to create a business on top of that,” Farley said. “Our growth as a company will come from not the four walls of the product. It will come from services.”

Those services include new businesses such as managing vast commercial fleets of trucks and vans – and could one day mean a vehicle that drives itself while ordering its occupant a latte.

The new CEO has some political capital to spend: Dealers like his passion, analysts respect his experience and he’s won the confidence of the founding family that still controls the company through a special class of stock.

The son of a banker, Farley was born in Argentina and grew up in Greenwich, Connecticut. After earning a bachelor’s degree from Georgetown University and an MBA from the University of California, Los Angeles, he worked at IBM for a couple years before accepting a job in 1990 to work in Toyota’s fledgling Lexus division. One of his first jobs was as a field rep trying to meet the demands of cantankerous car dealers.”That was a tough, tough, tough assignment,” recalls Jim Press, Toyota’s former American chief who gave Farley that job. “But you could see him develop an understanding of the importance of dealers.” That education is paying off today as Ford’s retailers are already warming to Farley. Veteran dealer Jim Seavitt recalls Farley working the floor of a dealer convention in San Francisco.

Beyond his personal touch, Farley won over dealers with his relentless work ethic, which includes getting up throughout the night to answer emails. He lives alone in Detroit, doesn’t own a TV and voraciously reads books. His wife and three children live in London, a legacy of his time running Ford’s European operations. He says his family will join him in Detroit next year after the kids finish at their U.K. schools.

Family is a frequent focus for Farley. His most famous relative is his cousin, the late comedian Chris Farley, with whom he was close. But when it comes to cars, Farley draws inspiration from his maternal grandfather, Emmet Tracy, who was employee No. 389 when he hired into Henry Ford’s suburban Detroit factory in 1914. Tracy, an orphan, would go on to become a Lincoln dealer in the tony lakeshore community of Grosse Pointe.

“I’ve been preparing for this my whole life,” Farley said at the dealer event. “I feel a lot of pressure not to let my grandfather down.”